The Warmth of your Hand in Mine 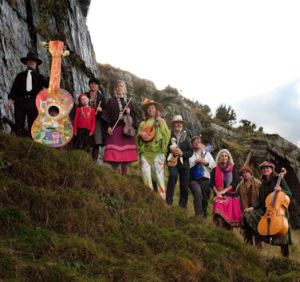 Our second album offers a colorful blend of  South American  and mystic folk melodies and songs. The title comes from a line of a  song by Victor Jara ; “La Luna Siempre Es Muy Linda” [ The Moon Is Always Beautiful]. One of Victor’s early songs , he sings about the poverty and oppression of his childhood as well as the fear instilled by the Catholic Church. He sings toward the end of the song : ” Because of this I want to shout; I believe in nothing apart from the warmth of your hand in mine. ”    For me this line is a simple and profound counter to the clutter of political and religious obfuscation , it’s a clarion call to compassionate humanity.”

The lovely front cover artwork is by Aberystwyth based artist Pete Stephenson.  The people are Johnny Corden, my dear old dad , a lifelong socialist and Christian who passed away in Jan 2011 and my dear Auntie Violet who at the age of 92 years, still sings like a canary  and sings two songs on the CD.    The crimson flower is a Chilean copihue.   the hedgehog is my Dad’s favourite creature.

This album brings together musicians from various incarnations of Cloud Cuckoo .

This is a vibrant and  optimistic Latin American anthem by  Cuban singer, Carlos Puebla.  Covered by Chilean band Quilapayun.

By Victor Jara .  A marvellous melody . this was played at the funeral of Patricio Bunster in  Chile in 2006.

The percussive sequence in the middle of our version is  accidentally peppered with the sounds of  Al and Jolie  ; two budgies belonging to Johnny Corden who were in the room where the recording took place.

Wade In  The water

A sublime song  by mystic folk band COB who recorded it in  Cornwall in the early 70s for the ” Spirit Of Love” album.  Cornish musician Chrissy Quayle who plays fantastic flute on our version also sang backing vocals on the COB album when it was first released.

” The Dream Exists” ; this is the title of our Victor jara festival in  Machynlleth, Mid Wales     The lyrics are inspired by  a tree planting ceremony by Ecomemoria  at the festival in 2011.   http://www.elsuenoexiste.com/   also by a visit to the notorious Villa Grimaldi  in 2010.

A Leaf Must Fall    From the Famous Jug Band album ; ” Sunshine Possibilities”; a lost nugget of the 60s.  Penned by folk maverick Clive Palmer   and sung here beautifully by Julie Hathaway  and gorgeous cello from Katherine Martin ; both members of the original Cloud Cuckoo.

La Piragua / Nyth Y Gog.   the former is a well known cumbia from Columbia ; the second is a great Welsh reel ; ” Cuckoo’s Nest”

Mi Chiquita   by Inti-Illimani .     charango on our version from the brilliant Chilean charanguista, Fernando Toro.

We Stroll The Lanes / Stackhouse Cove.    the first is sung by Violet Bedson  , 92 years old.  The second  refers to one of my favourite places in Cornwall.   In the cliff there is a strange  mossy passageway leading to what seems to be a well .   I was there once with Peggy my mum , and told her about the well.  Usually very cautious and reluctant to go clambouring about in strange places  , she asked that I help her to climb up to the entrance and in we crept into the small mossy cave within.   Stackhouse Cove is rarely visited.  It has , so I have read, the widest variety of seaweed of any place in the UK.

El Gavilan   is a kind of ground living bird. this song is sung by Venezuelan , Gerardo Osal.     Gerardo has attended the El Sueno Existe festival 3 times from Venezuela.   I first met him in Santiago cemetery in sept 2003 following a near riot which took place during the annual march to the tomb of Salvador Allende.   Despite his lack of English, he  has become friends with most of the inhabitants of Machynlleth and charms people with his fantastic music, playfulness and magic tricks.  the ultimate busker and instant party generator.

Rag And Bone Man   . One morning  I was helping my dear Auntie Violet, to get up and washed. She said to me : ” Oh I’m so worn out. just put me out for the rag and bone man. ”

Now Is The Hour .  to wave farewell.  A heartfelt old timey song.   Sung by Violet.

Hope you enjoy this hotch potch of an album.